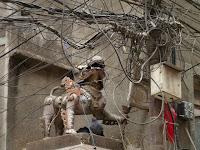 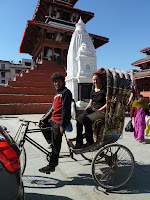 It was hard to leave Pohkara, particularly after so long out of the saddle but finally we pulled out of town with only 200kms to Kathmandu. At first the road was built up and uninteresting but soon we were again amoungst the rice fields and villages. We had heard that Bandipur was a town worth visiting and lay only 8kms of our route an easy days ride away. At the junction however the road slanted steeply up and there stood two cycle-tourists the first we had met in months.
Sophie and David were Austrailian and had been on the road 3 months through India and Nepal. They had tried to reach Bandipur, found it too steep and come back down again. As they looked much fitter than us we also declined the incline and together we stayed in Dumre, a village in the valley where we swapped tales from the tarmac.
Next day we walked together up a flight of steps through the forrest to Bandipur visiting Nepals larges cave system on the way. The village contained the finest architechture we had yet seen in the country which was unexpected in a hilltop settlement. Walking down another extensive ancient stepped path we reached our hotel just before dark. A wonderful unexpected day.
Our intention was to cycle together to Ghorka again uphill off the main road but I came down with a fever after only a few kms and had to hole up in the next town. I hated being the weak member of the group but we had to let the Ausies go on without us. It turned out I had contracted somehow Gardia, strange after such a long time of good health. We always filtered water and I still am not sure how I got it, though I blame eating Buffallo after 4 months of vegetarianism. I am back on the rabbit food. No, I jest, eating meat here is pretty unnecessary.
A day in bed shivering saw me strong enough to cycle though slowly and after another night in Adamgaht, a small village with a great little guest-house run by a friendly young chap called Kas Kumar (or similar) we climbed up towards the pass that would lead us into the Kathmandu valley.
As we reached the pass a few spots of rain fell but as we crossed it this turned to a thunderstorm with hard hail. Misjudging the severity we got soaked and cold as we hurried into the city and dove into a cheap hotel.
We were informed the next day that Tibet would be closed for the whole of March and there was no chance of us entering before April. If then. Bad news. This meant we would have to wait or fly to China. The route through Myanmar to Thailand being also shut to overland travellers. Deciding to wait we took a cheap apartement in Kahtmandu in a street believe it or not named Freak Street, where all the Hippies hung out in the seventies. We look over an interesting square and wander occasionally into this lively city.
In a few days we will go walking once more, this time in the Langtang Himalaya. There are worse places to kill time.
Posted by BikeBlogger at 01:54 1 comment:

Night on a Bare Mountain 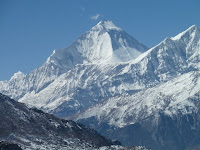 Brimming with confidnce after our pass success we decided to take a detour to Kagbini a recommended village. We were soon following a solitary set of footprints up to a saddle. 3000ft below was the river valley we needed to get to but we lost the footprints in the thaw and were left on pony paths heading what seemed the wrong way. The map, we had long ago realised was not detailed enough. An unmarked wrinkle in a valley could mean a drop of a few thousand feet to a dead end or only to climb out again. At this altitude this could mean half a day at least.
Eventually we cut accross country heading down towards a gorge, trusting to find a way to the river. My mind is trained on smaller landscapes and I misjudged the scale of these hills. Luckily I looked back to Anja and realised I had crossed a path at right-angles; one going our way.
Trusting in the sheep-trail to know its way down the cliff, like believing in a horse to find its way home, we followed hoping there would be no impossible ice on the way. Streams flowing over the paths here often freeze into impressive ice-fountains, dangerous to cross. We were in luck and wound our way down to the broad river-bed. Home and dry.
We had been finding ammonite fossils all day but a vertical beach making up a whole cliff face, complete with preserved sand ridges and tiny sea snail fossils was a geologists dream. Later we saw a similar formation making up part of a village street.
Kagbeni was a square housed, flat roofed village looking upriver to the upper Mustang region, an arid, Tibetan type landscape in which we were not permitted. We stayed a few days.

Having failed to learn our lesson we daily tried to take unmarked trails down the long, descending Kali Nandaki Nadi valley on the opposite side to the dusty track. Often we were rewarded by needle-carpeted and magical paths through the ever thickening pine-woods, not unlike the Alps. The occasional lumberjack felled with an axe, squared up with an adze and called his son to help plank-up with a pit-saw. I realised I had not heard the nag of a chainsaw in either India or Nepal. Often though, our alternative route took us over fresh or live landslips and once to an abrupt cliff- face. No option but an about turn, backtracking and an after dark, sore-footed arrival in the next village. Luckily though, this temperate band was the apple capital of Nepal and he resulting brandy could compete with the best calvados. Aching soles soon forgotten.
In this valley we were meeting more hikers. In the evenings anyway. We spent a nice one with a French couple from Arcachon and a Dutch guy, Mink. sipping apple-brandy before a rare open fire.
Further down we met again two Russian girls with whom we walked a day or two. Another sociable night was spent with this entertaining pair and two Germans, Edwin and Isabel. It turned out that Anja had a mutual friend, Petra, in Reutlingen and Anja had heard of Isabels travels in Australia. They were taking a different route but maybe we will walk together in the Swabish Alb sometime in the future.

After 3 weeks walking through many different climates, from the land of hindu temples to that of Buhddist prayer wheels and flags; through the realms of the jungle pheasant to the home of the highplains partridge and the Yak. The people here live far away from the hectic world of the automobile, a quiet existance though a hard one. The slopes are too steep for tractors and often settlements are connected by steps rather than paths which should keep mules and ponies in employ for years to come. I recommend this 'tea house' trek to all. We will hopefully be privelidged enough to someday return to this area.
Posted by BikeBlogger at 03:06 No comments: