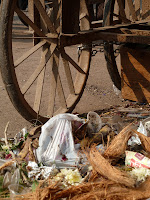 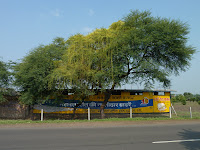 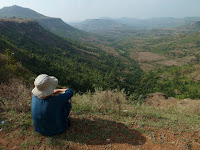 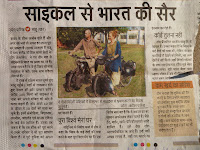 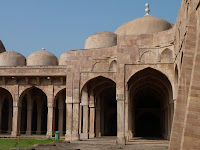 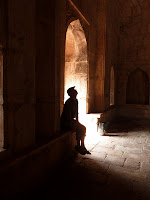 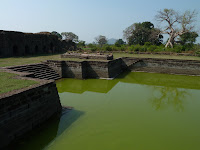 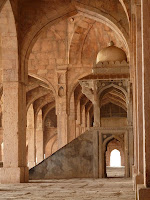 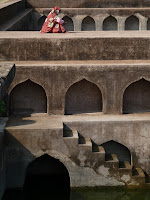 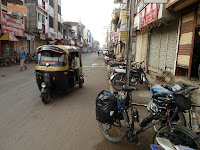 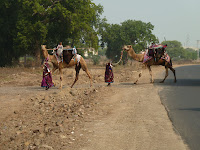 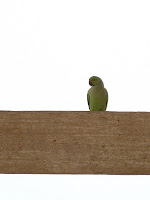 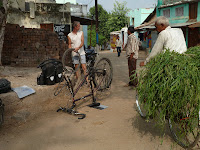 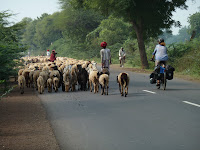 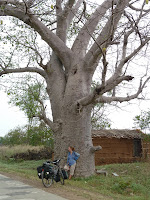 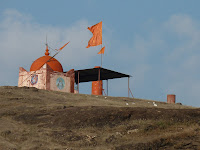 We have been on the temple-tour, slowly working our way north from Karnataka through Maharashtra to Madra Pradesh and are now in sight of Rajastan. In Badami, a normal noisy, dirty town were the most beautiful cave temples. With Volke, an Austrian playwrite we took a tuck-tuck trip to the impressive temples of Pattadakal. Bouncing down the backroads was a novel but uncomfortable way to travel. 'My god' said Volke, 'you must see some real rural India on the bicycles'.
'Sometimes it's a bit too bloody rural' I replied, thinking of our daily relationship with excrement on the roads. How for the last few hundred kms, on the edge of every village was a 50m breath holding zone. Of all the various and opposing words used by us foriegners to describe this land, 'clean' cannot be one that pops up very often

Next we saw the old fortified town of Bijapur, with large mosques, mausoleums, spiral watchtowers and huge cannons. What impressed the smith in me were a couple of 20m cannons each made from 200 fire-welded wrought-iron rings. I can only think they were made standing vertically and the fire moved upwards for every weld. An ambitious project and as they are still intact it would appear one that worked.

We had to take a major highway to Solapur. Gigantic six axled, overladen and undermaintained, highly decorated and home-made megadons crawled slowly past us. Contrary to popular belief these guys are non-aggressive and though they honk and snort they mean no harm and give one plenty of space if they can. They are so long that the grunting from the front end could no longer be heard when finally their tails dragged obediently by. More dangerous were the tyranosaurus-buses who liked to attack from the front but could be outsmarted by simply jumping into the dirt by the side of the road. Between these monsters wove silver-shrieking, carniverous, 4WD-velociraptors. Small, chickenlike-motorbikes clucked fussily as they passed. Ox-carts, dogs, cows, buffallo and gypsy camel-trains were indifferent to the pace and flow of this two-way exodus. They looked on, quietly confident in their ability to outlive the crazy, motorized species heading lemming-like to some hopefully not so distant brink.

Ellora, Aurangabad and Ajanta have magnificent cave-temples, Hindu, Bhuddist and Jain. In Ellora we met John and Amelia, an interesting American/Spanish couple who took us in their car on a day-trip to Ajanta. We later supped whisky and smoked cigars to celebrate Johns birthday. He was here researching his book on, if I have it right, Art Deco influences in modern Indian vernacular architecture.
Further North in Mandu we met another Volke, German this time, with a good sense of humour, and spent some fun times on this beautiful Plateau. Amoungst the well preserved and restored Afgan mosques and caravan-serais which are scattered about this boabab plain, we met a couple of French cyclists who had also pedaled their way from home.
One evening three tough, adventurous-looking and unshaven, pierced and tanned western motorbikers pulled up to the village eatery.They regailed us with daring tales of 200km days on rough roads as they stepped down from their Enfields. They had no idea that four of the five ordinary looking, clean shirted mortals with whom they spoke had cycled over 10,000kms from Europe. Jean-Mark and Marie were to polite to suggest they might know something about Indian roads but the be-engined trio spotted our bikes and the truth came out. (Or did I just tell them?). The Bikers were a decent bunch and it was nice talking to them. I was smugly pleased though, to notice less swagger in their stride as they mounted up and rode off to the posh resteraunt on the edge of town.

In Mandu our Media career continued. Beginning in Turkey we have now conducted five interviews for local papers. (A local paper in India selling more copies than the 'Sun'). It is not easy to get any real facts accross owing to language barriers. Even with an interpreter things get twisted: Question; 'And how do you find India Mr Franklin', Answer; 'Bloody noisy'. Translation from Hindi paper by man on street next morning; 'Mr Franklin advises a way of peacefulness and 'Shanti' for the Indian nation'.
The translator, our landlord and ex-Major was a fine and diplomatic fellow. I liked him for his respect of different religions, of traditions and of whichever gods creatures. An ant problem was dealt with by giving them flour. The idea is that when they find a large source of food they up and move their colony. The fact that the dogs all came to eat the flour, didn't bother him overly and seemed to be all part of the same acceptance of the way things are. What did annoy him though was singing coming from the Jain temple at dusk. Apparently the modern Jains had forgotten that this was an important time for birdsong and that our feathered freinds should not be disturbed. Though this same laises-faire attitude might have been responsible for the slackly run and grubby guest-house, I choose to blame the drink-problem. Leave the live-and-let-live guys alone I say!

We enjoyed being local celebrities for a day, with people stopping us and showing us our photo in the paper. They seemed to think it was a good article. It was back to being normal unusual people again though on the morrow.

One night we came to a town that was just a glorified bus stand. No lodging. We had passed a sign just out of town pointing to a "Heritage Village" and a fort. We arrived through the gates to a peeling-white painted old building and were shown to the only really clean room we had seen in India. 650 rupees was the sum asked and although twice as much as we were used to paying I thought a little luxury would do us no harm. Anja declined the first shower so I took it and then the staff came to collect the fee. It turned out they had got hundreds mixed up with thousands even though I had drawn the figures in the dust. A simple mistake, they were nice guys but we were left in the awkward position of coughing up over a hundred Euros or packing up and heading off into the dusk. I rememdered the words to an old song: "Don't leave me alone in the twilight, 'cause twilight is the loneliest time of day", as we cycled back down the road looking for somewhere to camp. Wildcamping in this part of India is not easy. There are people everywhere and they would pay less attention to a landed spaceship than to two Ferengi cyclists and a tent if they discovered us. They did not and we spent a pleasant night by an old well listening to the varied sounds of an Indian night in the fields.
We woke in good spirits the next morning and were watched from the well rim by four little-owls as we packed up camp. We will do this again, both being bored of the hotel game.

Ujjain has not impressed me much but maybe I am longing too much for the mountains. Winter or not, Nepal should be pretty.

Oh yeah, Pop, as you can see we discovered the original spaghetti tree !!!
Posted by BikeBlogger at 23:46 3 comments: