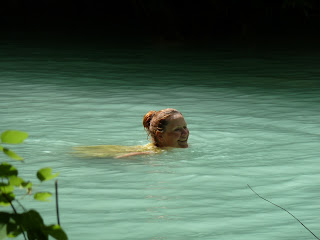 "Well look at that" said Anja, stirring me from a deep green slumber and pointing out of the open door of the tent. "There is a monkey sitting on that rock eating some monster fruit".
As my eyes finally focused I located the said ape, a handsome feller, surrounded by the discarded shells of mangostines and 'monster fruit', so called (by us) because it reminds us of Animal, the drummer from the Muppet show.
"Funny" I remarked "because we have a couple of kilos of monster fruit and mangostines too".
"Had" said Anja dryly
"The little monkey"!!
After totting up the score over breakfast it was a landslide to the jungle creatures: them 4, us 0.
"Coffee" I shouted at the howling wall of the woods 20 yards across the campsite grass from our tent.
"You haven’t got hot coffee"
They did, it seemed, have most of our other stuff. How can a bag be water-proof but not ant-proof? Usually, when taking a break by the roadside we enjoy watching the ants cart away our crumbs; they have usually cleaned up before we move on and taken everything below-ground. Two ants working together look like removal men carrying a washing machine; "Left a bit John, now turn it, ok, forward.." Sometimes there is an ant road, two lanes, one way empty and the other way bread transport. There is usually one solitary ant on the wrong side going the wrong way, uninterested in our offerings. A rebel. "Turn around No.2763 and don't give me any of that claptrap about preferring brioche"!!
Today though, there was an ant-autobahn removing everything edible from out of our supposedly closed kitchen bag. A bit much, onto of the monkey stealing our fruit from under the fly-sheet, and the giant big-eared deer taking our rubbish bag from its monkey-safe hiding place. I had to chase it round the clearing in the middle of the monsoon night in nothing but my shreddies until the beast finally dropped it. We did not want it dying from plastic gut syndrome or suchlike.
The flies and mosquitoes and leeches were intent on sucking our blood and even the butterflies kept landing on us and licking our sweat. The grasshoppers had decided they liked camping and were squabbling over who's side of the tent was who's.  Anja wandered off for a pee and came back with a large butterfly, a bush-cricket and numerous beetles riding on her hat. The dark face of the forest spat out the occasional bird, reptile or mammal who weighed up our potential worth, calorie-wise, before disappearing back into the underworld to make devious and daring plans for the next heist. I consider myself a fairly outdoor sort of chap but this day I felt like a townie. In fact a townie would probably fair better than me in this environment as he would most likely have watched more 'Bear Grylls' on the telly. Anja asked if I had to survive in the jungle and could take one thing with me what would it be? On reflection I said a good knife or a machete. Her answer to the same question: a camper-van!
We had the Kao Yai national park pretty much to ourselves people-wise, it being the wet season and all and we followed a deserted strip of tarmac 65kms through the woods. This is the same mountain range (though different named park) where we cycled up that dirt track a few years back Derek, do you remember? We ran out of water on a super-hot day only to find after 25kms the track, which was marked as a though-road on the map, had not the courage to cross the ridge and descend the other side but stopped dead. We had to return all the way. This time we made it right over and the next day pushed and shoved our way down that crazy road past the airport into Bangkok. At least this time it was daylight.
The ride from Vientiane was a pleasant one down the back roads in a seldom visited part of Thailand. We stayed in a couple of motels, camped, or crawled into the bushes as Anja calls it, and stayed in the grounds of a temple, where it seems you are always welcome. The monks are mostly young and seem like guys doing national service. They are all MP3's and mobiles, loud music, tattoos and Pepsi-cola. Very welcoming and generous.
We rode a few days through a strangely European or American style landscape, with dairy cows grazing in lush meadows and milk-churns waiting collection by the side of the road. Only the sugarcane fields and the pine-apple carts reminded us we were in the tropics. Oh, and the fact that you get sunburnt while it’s raining!!
Sunburn on a rainy day makes my skin peel, peel, peel away.
I must buy a new cassette, cogs and chain for my bike, after 17000kms they are all stretched and worn and finally slipping on the hills. Anjas was treated to a new set in Kathmandu. Our puncture-proof tyres bought in Istanbul are still looking good and have not let one thorn through. Our tubes though, wear out from the inside and need to be replaced sporadically, a problem I have been unable to eradicate even with tape wrapped round the rim. Otherwise, though looking a bit travel worn, our steeds our doing well. Us? Well, I am a bit thin and still have matchstick legs but am otherwise ok. Must drink more. Anja has is troubled by some kind of heat-rash thing on her legs but we are hoping some salt water will help. I have prescribed a week lazing about on a beech somewhere, drinking cocktails from a hollowed out pineapple (with or without little umbrella) and occasionally snorkelling or scuba-diving. Hopefully this medicine has no lasting side-effects!
Posted by BikeBlogger at 19:04 No comments:

The Road to Luang Prabang