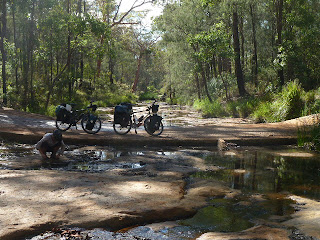 Up Above Down Under


Last year, lest you have forgotten, diligent reader, we spent Christmas somewhere lost in the damp mists of northern India, and Christmas dinner was a damn good meal eaten alone in a typical small town restaurant. We left full but unrestored.﻿ ﻿

This year we decided to try and do something a little special, not that we are overly big on this festival but it is a reason to try and make a day stand out from the others. A hard thing to do when so many of our days are outstanding and, with travelling alone in such an unvarying part of the world, difficult to organize. A look on the map showed a National park, The Blackdown Tablelands, a little south of our route and which, with a little planning could coincide with Christmas.﻿

Visiting National Parks by bicycle in the Northern Territories mostly demands at least a few hundred km detour on rough tracks and until now, wanting to keep ahead of the January rains, we had not allowed the time to see any. The Blackdown tablelands designated camp area looked to be about 30kms south of our road and ‘Tablelands’ meant 47000 hectare plateau rising above the plains. Sounded good.

Reluctantly we left the protection of the Botanical Gardens in Emerald, a park any Capital City would be proud of, and rode a good ride to Blackwater, Queenslands Coal Capital. Here we stocked up on food and serious amounts of water as we were assured that none was available in the park. The bikes were heavily loaded as we pulled out of town hoping to ride the 35kms to the side-road turn off before sundown on the 23rd, zipping up the hill in the morning and having camp set up well before lunchtime on chrisymas eve.

Well, best laid and all that, less than a mile out of Blackwater my freewheel hub decided it had gone far enough and If I was going to ignore its brief but obvious warning groans signifying breaking ratchet teeth, then only I was to blame. When worrying about a slight noise in the first car I ever bought, an older friend at the time had advised that if I was not in a position to do anything about it immediately, it was best to stop worrying and enjoy the ride. Advice I have perhaps taken too much to heart in life.

So I had no drive in the back wheel, and a ride back into town revealed no bike shop,( none expected), and practically no-one on the streets to ask for help. I approached all of 7 people, Blackwaters outdoor population, trying to elicit the possible whereabouts of an old bicycle-wheel for parts. I believe most people in Blackwater could fix a 100 ton dump truck before breakfast, but bicycles were pretty much an unheard of machine around these parts.

Back to Anja under the roadside tree. We figured to try and turn the bike into a fixed gear arrangement by locking the cassette with a spare brake cable to the spokes, disconnecting the derailleur and shortening the chain. We were hopeful this would work but the chain kept wandering over the cassette, up and down, no-matter what I tried to do. The sun was setting and we defeatedly pushed back into town. It was lucky we were so close to somewhere with such a breakdown. We always seem to be lucky in this respect.

Figuring to camp in the park, Anja asked a woman in her garden for directions, told of our problem and we found ourselves directed to the Samaritans second hand church shop. Apparently they often had old bikes and might be able to help. They would be closed but they lived right next to the church.

John and Karen were the best kind of Christians. They calmly figured out the best way to help us. Behind the church was the scout-hut and a good place for our tent. We could use the church kitchen and toilets. They had no compatible bike parts but an old mountainbike that had been run over by a car was found under a tree in the yard and a bunch of tools brought out of the garage. Ok, my bike was a nine speed and this one a five speed, the freewheels different, and the best rim the shape of a circular banana but both John and I were confident that something could be done. With the help of a 3 lb hammer I got things straightened out a bit and we were back on the road by 8 am next morning; it looked like Christmas was back on. God bless the Samaritans. 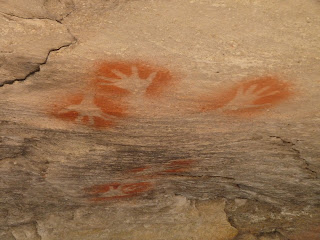 ﻿ Headwind, Hot, everything seemingly flat actually uphill. Same old story. By early afternoon we had fought our way to the foot of the plateau. It was bigger and further away than it had looked. Before we even started up the 600m, 6 km climb the whole show ground to a halt. One could not really say that we ever travelled ‘light’, but things had got a bit ridiculous. We had 22 litres of water, a spare wheel and a lot of food, not just the festive fare but enough to reach Rockhampton still some hundreds of miles away. I look back and laugh now but it was serious at the time, we could not even push up the hill let alone ride and we knew that if we found no water on the plateau we would have to come pretty much straight down again.

There were lamb chops, green beans and onions, tins of baked beans and Irish stew, bags of biscuits and a big fruit-cake, large tins of peaches (a far finer invention than sliced bread) and a pot of cream, loaves of bread and jars of peanut-butter, marmite and honey, Kilo’s of hot chocolate and milk powder, (far cheaper to buy in bulk here in Australia). We had a kilo block of cheddar and a box of wine, add to this Anja’s bag of stolen mangoes, 3 litres of Applejuice (on special offer), all the other sundries, staples and snacks I have forgotten and you begin to get the picture. We considered turning around but there was no-where else to go.

We ate the mangoes, cached the spare wheel as we were coming back the same way, and as the water was going down fast anyway we managed to drop a few pounds. After Anja changed into her walking boots it looked like we had a chance of getting to the top. The trees got bigger and the undergrowth thicker and small walleroos bounced between the red-sand boulders. Our minds were diverted by the wonders of the place and we forgot about our troubles. At the top the asphalt road ended and a pea gravel track led on to the camp site but we were done for the day and a storm was brewing anyway.

By a lookout post that had a view looking back on the flat expanse of Australia over which we had ridden. The air was dusted with bushfire smoke adding an extra hue to the sunset. Carrying fresh meat in Australia is difficult so we decided to have Christmas dinner then and there. It was a splendid feast but we had to pack up quick as a storm approached.

The only place we could get a tent-peg in the ground was in the bottom of a gully so we put up the inner tent in the ladies toilets. Sounds a bit grim but I must add that these were the cleanest, best designed conveniences in the world. We imagined without difficulty that we were in an alpine hut with two ensuite bathrooms and a bike garage.

Pea-gravel is a simple but apt description of the road material. Imagine riding on a steep track made out of frozen peas. One slips backwards on the uphill sections whether riding or pushing but we made it to the campsite by 9 am and did little but eat and drink for the rest of the day though we made a short walk through the woods in the evening to a cliff-face where the stencils of Aboriginal hands were still bright in red-ochre.

Sitting round our fire in the too brief dusk we were visited by Gary, an Aboriginal with a German father and an unusual name. he was a, well I forget the term he used, but a sort of Native guide and bush-tucker expert though he came from some lands to the south. He talked of plants, of stone-tools and the rainmaker that came down from Arnhem land when he was a boy and understood the beauty of a stone axe. I showed him the stone flake, one of many we found one red-orange evening back in the outback when by chance we must have camped in a quarry that could have been either 100 or 50,000 years old.

On Boxing day we followed the frozen pea road over bare-stone creek beds to Rainbow Waters where a waterfall fell from cold brown pools over sandstone ledges then over the edge of the tableland. To the tribe that gathered fern roots and stringbark on these lands before the cattlemen came, this place represented the source of all life, Moonda Gudda. Understandably so, we sat in a cool and tranquil awe for three early hours until the first of the few and intrepid holiday folk arrived.

As we reclaimed our bikes from the trailhead a pick-up (ute) emptied two tough looking miners who mumbled G’days and I overheard one say to the other, “Jeez Bruce, that’s hell of a bike ride”. They didn’t know the half of it. This isolated world was like Tarzans hidden world on the old Johnny Weismuller Saturday morning show. A forest paradise sitting high and sheer sided above the jungle beneath. We had an unforgetable Christmas.


Posted by BikeBlogger at 18:59 No comments: