The Sweet Lipped Harlequin and The Isthmus of Kra

SOUTHERN THAILAND
The list went along the lines of: Three Spot dascyllus, Polkadot Nudibranch, Longface Emperor, Yellowstripe Scad, Redbelly Yellowtail Fusilier, Indo-Pacific sergeant, Titan Trigger,  Bluespine Unicorn, Blacktip Grouper, Slingjaw Wrasse. It went on with other inspired names and included my favourite; The Harlequin Sweetlip. The guy who named all these fish and sea creatures  was obviously awed by their multicoloured beauty and figured he had better come up with some titles to do them justice. This is just a few names of fish encountered, read out from my new scuba-diving logbook which I proudly received after taking a short course in the skills of the underwater art on the Island of Koh Tao (Turtle Island) which lies some 70kms off the east coast of Thailand.
A more perfect place for diving and snorkelling it is hard to imagine though apparently they exist. The outcrop of Koh Tao is a and unruly pile of igneous boulders smothered by thick forest. The large rounded rock formations are visible where they rise above the trees to a lofty peak or where they are washed clean by the sea, being slowly ground into sand which, mixed with the crunched and ejected coral fragments, once the meals of parrot fish and the like, make up the many beaches.  There are tracks  that lead to some but not all of these beaches but they are incredibly steep, the hardest  we have yet encountered. Both of us would push one bike at a time and would still often slide backwards in the dust. We got a bit lost and ended up not where we wanted to go but where we were obviously supposed to be, Tanote bay, and stayed for a week.
Scuba-Diving here is like climbing into the tropical marine fish tank in the pet shop. One is surrounded by mostly indifferent but sometimes inquisitive  fish who don’t see us as a predator so will often peer into ones mask from just the other side of the glass. Some little black fellas are territorial and attack if you hang around their rock too long. In fact, to get amongst some of the most interesting creatures neither an air tank or a snorkel is needed, just stick your head beneath the surface in a foot of water and a whole new world is revealed. Anja spent about 10 hours a day snorkelling while I was in front of the blackboard learning theory or underwater trying not to breathe through my nose, panic when my mask filled up with seawater or make some buoyancy error which meant I would suddenly, unintentionally and dangerously shoot towards the surface.
Another rickety old night boat brought us back to Chumphon on the mainland and in the damp early grey we set off to cross the so called Isthmus of Kra. This is not some mythical land from a Conan the barbarian pulp fiction paperback or even a name given to a visible land formation on the planet Mars but the thin strip of land separating the Gulf of Thailand with the Andaman Sea. Where we crossed it is only 60km wide and hilly but not mountainous so we figured things would be pretty much the same on the other coast.
I like reading guidebooks when I arrive somewhere or even after I have left. I know this sounds strange but reading them beforehand kind of well.. guides one along in a way that often leaves me frustrated or annoyed. It takes a lot of the chance out of things. This time however a quick flip through the outdated German guidebook that Anja found somewhere might have saved us from our present situation. That is; sitting in a bungalow surrounded by smelly and mouldy clothes which refuse to dry and looking outside at the most constantly ferocious rain I have ever seen. When we finally opened the relevant page in the book (somehow the pages of places far out of our way make better reading) this is what it said “Ranong ist einer der regenreichsten provinzen in Thailand.  Von mitte April bis anfang Dezember ist regenzeit, von juni bis August giesst es in stroemen.” Now that sounds pretty wet even if you don’t speak German.
We rode for four days through constant and heavy monsoon rains and I swear I was dryer when diving. Our top of the range “waterproof” panniers turned out once again, as they did in India to be only showerproof so all of our stuff got wet. I tested the bags by filling them with water and seeing where it ran out. After 16 months of use there are small holes in the front bags and the screws and rivets were no longer tight. A bit of repair helped things quite a bit but the things, although being the best there is would never be fully waterproof.
Tomorrow we head for Phuket and hopefully a good cycleshop whatever the weather. Anjas bottom bracket, ie. the pedal bearing has worn out and unfortunately, being a fancy pants XT part is hard to replace in Asia (bad planning on my part). Special tools are needed to even get the thing off. If we find no suitably equipped bikeshop I fear we will have to go old fashioned and bodge up some special tools in a blacksmiths shop and then hope to find some bearings the right size.
After 18000kms certain parts on the bikes are coming to the end of their natural lives and needing replacements. I reckon by the time we return the frame itself will be the only original part. Maybe not even that if we have to fly again.
Posted by BikeBlogger at 02:14 2 comments:

Bangkok to the beach 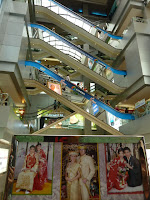 So you are probably thinking that a bike-ride down the East coast of Thailand would be all smooth flat roads running under palm trees along lonely beaches with the odd pastel fishing boat yawing on the gentle lazuli swell while sheer faced islands float upon the horizon. That perfect camp spots are easy to find on grassy meadows by the sea where the sun can be watched rise and fall and shells as shiny as treasure can be found along with unknown creatures when the short tide reveals its rocky nooks and pools. That the natives wave and smile and welcome you to their country when you meet them collecting molluscs in the early light.  If something along these lines is what you imagine this stretch of our journey is like then congratulate yourself because you’re right. 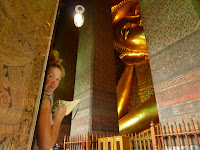 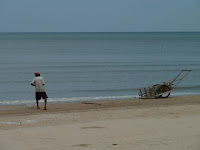 Oh, of course we have encountered a lot of problems too like, um, like, hang on I wrote a list so I wouldn’t forget, where is it now.. ah, here it is : sand, big problem, I love beaches but they are often sandy, sand in the tent, sand in the food, sand grinding always on our chains and cogs; ants, yep, our friendly relationship with the busy little chaps has turned a bit sour in Thailand. Last night (after a few sundowners under a coconut tree, which I guess is a potential problem itself) we both needed a pee in the night. Having seen the amount of 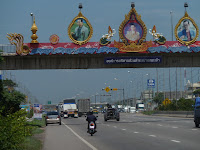 snakes squashed on the roads we decided at least to put our sandals on and both got about 3 yards before we started shrieking and scratching. I thought at first it was jelly fish (still a bit sleepy) then remembered there were no air jellyfish. It was red ants, thousands. They had for some reason decided our sandals; left in front of the tent would make ideal foundations for a few new high-rise 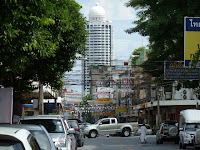 condominiums in the Formosa style. Back in the small tent a serious ants in the pants dance was performed. These tough little fellas would not let go.  In the morning I found a dozen squashed little bodies still clinging with their clenched jaws to my more sensitive parts; 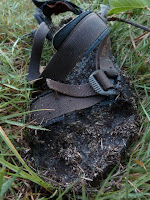 Sun, it is hot and it burns and lastly, headwind, all the way from Laos it has been against us, not strong, not constant, but every day and always blowing the wrong way. 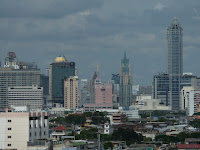 I am sure some people manage to find some real thing they don’t like about Thailand, but it can’t be easy. There is the sex tourism angle I guess, can’t say I know enough about it to make a valid comment. We see sometimes in the bigger towns the odd grey haired white guy drinking a coca-cola with a Thai girlfriend half his age, a bit weird but there must be something in it for both of them. We imagine how hard it must be to keep such a relationship going, more with the cultural difference than the age one., I mean, we find it hard what with Anja being  foreign and all (and the Sauerkrauts are quite normal really once you get to know them)!!
Leaving Bangkok was relatively simple. The town planners tried to get us lost with a lot of one way systems  but they had not counted on us having a handlebar mounted compass (thanks Derek) that, through dead reckoning, brought us always back on course. We had to make a certain allowance for sideways drift in the strong, cross-town motorcycle currents and avoid a few uncharted hazards but soon we were making 12 knots 240 degrees east into a stiff headwind down highway 35, the major and at this point only road leading to the south of the country.
After 85kms of dull but safe cycling we turned south on route 2021 (nearly all roads in Thailand have numbers and milestones every kilometre (can’t yet bring myself to say kilometre stone)) and felt  pretty pleased with ourselves as we rode through salt, fish and shrimp farms where long legged birds waded and sifted and 5 foot lizards thrashed about in the mangroves. 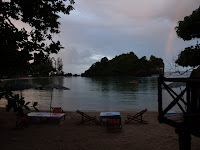 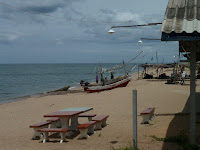 We camped again in the grounds of a Buddhist temple where the unflustered monks brought us cold drinks and giant candles. Both the act and the wax lit up our evening.  We were shown a block with showers and toilets, a shower after a day in this sticky heat being well, not a godsend I suppose, but let’s 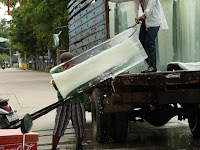 say a welcome gift from Sidney Arthur. In the morning we received a visit from the school head teacher  as it seemed the shower block belonged to the school.  I tried to imagine a similar situation in England: two grubby, sun-faded travellers are found in a small village, sleeping in the school/churchyard and making free use of the facilities. Would the head teacher call the police or insist they come in for coffee and doughnuts? I am not sure what they would do but I don’t imagine the vagabonds would  be introduced to the kids and filled with cakes and hot beverages like we were.  We wonder if we get specially treated because we are foreign and our skin is a different colour!! 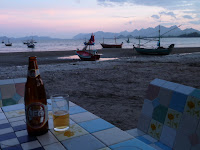 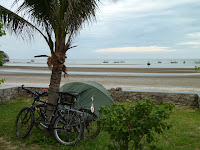 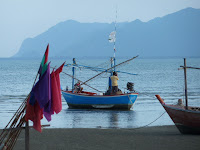 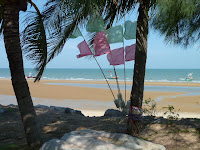 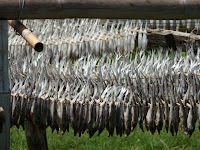 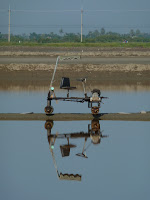