Still in Ermatingen on the Bodensee 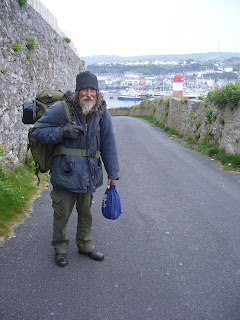 Anja has gone out for a walk with her friend Kirsten and her daughter Greta. Husband Peter is out somewhere, probably playing with his new aeroplane.
We are recieving some fine hospitality here and there could not be a nicer place to take a break.
I have just finished tinkering with the bikes. Mine has an annoying click coming I think from the bottom bracket and Anjas gears are a bit rough, I will try a new cable sheath on Friday as I have to go a bit North to Tübingen and know a good cycle shop there. I will pick up a few more spare parts aswell.

We have so far had two punctures, well one really as the second was caused 10 minuits after the first because I failed to find the offending glass shard hidden in Anjas tire. I have also had a spoke break in the back wheel but that is about it.

I am slowly figuring out how this blog works but until Anja decides to fall in another river or something exciting I don't really know what to write though I have the time right now and internet access.

I could I suppose tell you about another chap we met on a path round back of the docks in Plymouth; Colin, a travelling man with a radio and a lively interest in politics and economics.
We were going in different directions but must have talked for half an hour or so on various topics but one I remember was the differences between life with few posessions and one with lots of stuff.
The thing I liked most about Colin was his ability to laugh at his own misfortunes and mistakes. He could pour humerous scorn on his former self as if on someone of only vague aquaintance. The time he was beaten up in Edinburgh was his own fault for being too drunk and falling asleep in the wrong place.

The footpaths of Britain are Colins highways. He has never owned a car and certainly wouldn't want one now,
'I see them all at the traffic lights, the drivers I mean, you can see them up close and well,' he chuckled, 'they don't look very happy'.

Sometimes it seems people with few posessions find it strange that alot of poeple rush aroung trying to obtain so many. On our journey this theme has cropped up often in conversation with all sorts of people. Comments on our baggage range from; 'Jeez ya godaloda kit' to ' how the hell do you live with so few comforts. I would hate that'.
I liked the attitude of many French folks to our stuff which was to give an appreciative nod when they had established our kitchen department was well enough equipped. The rest was unimportant.

Though not understanding why they were, Colin was glad that so many people are so busy 'because' he said, 'if they all didn't work and just wandered about like you and me the whole country would fall apart'. Fair point. Keep going everyone. Please.

We talked about alot of footpaths, I remember, and it seemed our man had walked all over Britain and Ireland and had been to Australia where the English winge about everything. I promised I would not.
'I know Plymouth' he said.
'I got stuck here for a couple of years in the pubs, going from one to another. Passing them all now would be a trip down memory lane if I hadn't forgotten so much . You couldn't really call that walking though, pub to pub, more stumbling really but I stopped all that drinking years ago.'

I had walked down this path in Plymouth before, twenty two years before with a plastic sack to sleep in. No ultralight tent or four season down sleeping bag safely stowed in a 100% waterproof bag. No Whisperlite cooker or MP3 player, Goretex raincoat, softshell Jacket or Thermarest mat. Jeez we godaloda kit.

I did have a plastic cup then though. The very same one I have with me now. I never did like it that much, it is a boring grey colour and my tea gets cold quick. Maybe I should get meeself one of them newfangled insulated double walled brushed stainless steel ones with a double skinned plastic lid with a slit to drink out of that keeps your tea hotter for longer.

Maybe not.
Posted by BikeBlogger at 08:51

Im very enjoying your trip, keep up the good work! and play!