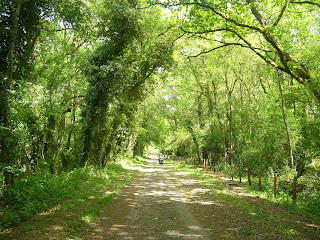 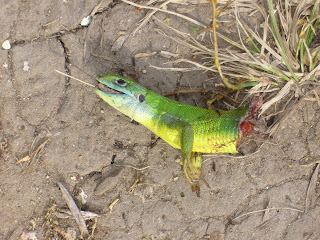 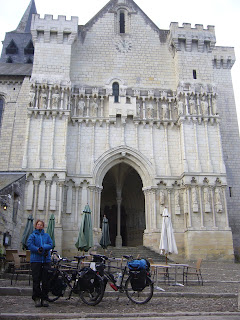 We have just left the Cafe Bergerac in Tours where we will take a day off. Battling against a strong headwind for the last 4 days has worn us out a little and we have not got so far along the Loire. Camping at night has been easy enough and some nice spots have been found but we have had to check out the health of the trees before we shelter behind them. Many have been blown over the wind is so strong.

The Loire so far has been wide and shallow looking with changeing sandbanks. The locals are proud to point out the high flood marks on some of the buildings and we please them by being suitably impressed.

The Path we have followed is pretty well surfaced though there have been a few rough sections and some roads which are nice and smooth though it is always a shock to be back in the land of the infernal combustion engine. Though we will be along time through France following the rivers and canals the pay off is the possibility to travel in the off road world.
We have met a few cyclists coming the other way. Notably some English Folks Who used to all work at Seal Hain agricultural research in the sixties. Before your time Pop, and they didn't know you and I have no Idea how to spell the place.

Have seen some Chateaux along the way and some remarkable churches, my favorite being at Cande st Martin where this interesting (as they all are I suppose) saint met his end. He was born in Hungary and was a soldier in the Roman army.
We have been woken each morning by a good amount of birdsong but what is noticably lacking is the profusion of waterbirds whose ideal environment we are daily travelling through. There are Herons and we have seen a couple of swans but I can only conclude that everything else that goes here under the title of 'Gibier de l'au' has been shot and gone for the pot. Perhaps some rule might be made in Brussels sometime bringing European hunting practices into line when they have finished making more important rules and regs but until then it seems 'La Chase' will continue to obliterate both native and migratory waterbirds.
We have had no mechanical problems so far, the bikes are doing well under all the weight of our bagage. I am compiling a list of things we can shed before we hit some hills. Cold weather clothing is not on it. It has been pretty cold for May In France.