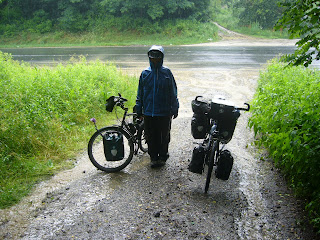 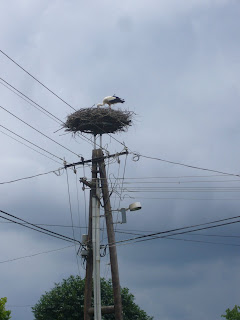 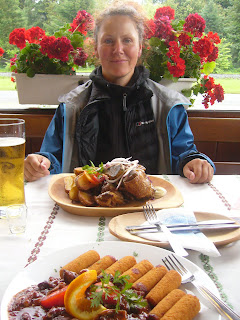 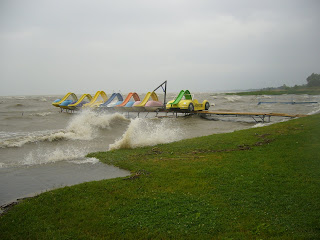 We are holed up in a bar on Lake Balaton watching the word cup Football. After a few days cycling in the rain we have taken a break. Strange way to celebrate the solstice but a force 7 gale is unusual weather for the time of year.
I wanted to come to Balaton after finding a picture book from the DDR time on Anjas Parents bookshelf. They visited here before Anja was born and told stories of meeting tourists from the west who it was forbidden to talk to.
The photobook was mostly in black and white with a few brownish 'colour' pictures showing sailing and rowing boats on a serene lake with a mountainous backdrop and healthy looking youths in baggy short trousers. Was the world browner in the seventies, was photo technology different or have the pictures gone this way over time. I imagine a little of all three.
This SW corner of the lake is geared up for tourism and rightly so but sadly no-one is here. Apparently ten years ago alot of Germans came, as they did before the 'wende' when the walls came down but somehow not so many come as they did. I guess they are all in Thailand or somewhere else more exotic. I am reminded of a northern English resort in bad weather in the early season.
From what we have seen sofar Hungary is a mixture of farmland forrest and modest mountains, pretty enough though to me the single storey houses with windows wider than they are high are not so appealing and speak of raw funktionality.
We have sheltered from the rain in a couple of arboretums and camped in one on the edge of a village. A night by a rapeseed field was a great camping spot until we were woken by a fox stealing our rubbish from on one of the bikes outside te tent. He was so bold he would not run away and even stood up with his paws on the flysheet and stared Anja in the eye from 3 ft away. When one of us mentioned rabies what was fun and interesting took on a more sinister part in our midnight minds and though busting for a pee after a few cans of beer we went trepidly outside together. I gathered the rubish in the morning but one beercan remained AWOL. The others were crushed.
We heard of the Iron curtain cycle path somewhere on the way and decided to take a break from the Danube. We bought the map, our first yet, and joined it at the Neuseedlersee. The lake was great and we swam ther but thecyclepath turned out to be all on roads and so tortuous that we were riding as much west as we were east. We decided to head for Balaton instead and from here we will go south to the Drau river which flows into the Danube once more.

I have just been shown the weather forcast which is slowly getteng better throughout the week. Thank god no-one has told us it will be sunny on Thursday, somehow we have had this for two months, and are fed up with waiting for a Thursday that never comes.

The bikes are doing ok, to date 4 punctures and two broken spokes. Our tyres are also doing well so I have not bought new ones as I planned; a decision I will probably regret at some point when we have to by substandard ones but procrastination is a habit hard to break. I will try to change sometime soon.

Wien was not the cultural experience it should have been. Everything Anja wanted to see was closed or started in a few days but we did have a great night in Klosterneuburg where we camped on the edge of Wien. We were in a cafe (sheltering from the rain) when a band from the music school came in and played Gypsy Jazz, Django Rheinhard mainly, Real good.

I wanted to go dingy sailing on Balaton and have eyed up some baggy shorts in a shop nearby but I don't think it is going to happen this time round. Maybe I will get the chance on the Black sea.
Posted by BikeBlogger at 10:07

Hi Guys, We know how it feels with the rain but here in Croatia now it's beautiful. We have decided to finish our cycling trip and are hopefully going sailing for a week.

We both agree about your comments about Wein, we had the same experience, left us feeling cold.