The Velcro Road to Istanbul 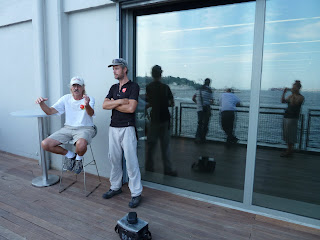 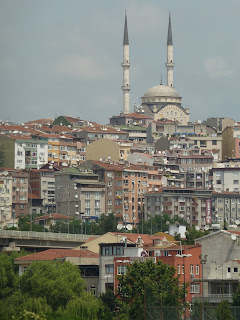 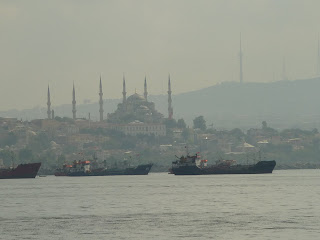 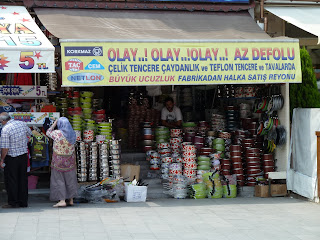 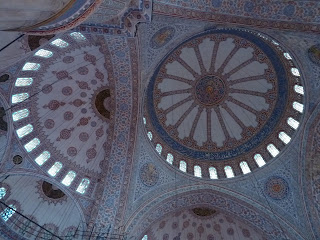 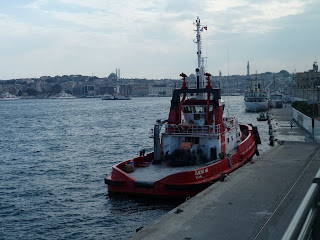 I am now watching the day begin in Istanbul. We have been staying in a hostel in the backpacker district and have enjoyed meeting numerous other travellers from all parts of the world.
We cut inland on some minor roads in Bulgaria and saw what a beautiful and largely mountainous land it is. The language is not too far removed from Russian and Anja was our communications expert doing really well chatting to the natives. I was not much use as I could not even read the roadsigns at first but was getting the hang of the alphabet by the end and recognising words that were directly transposed.
Climbing the last hill to the Turkish border I looked behind to see a recumbent bicycle catching us up. This was Fabian, a flamboyant and friendly Frenchman on his way to Armenia from Marsielle. We crossed the welcoming borderpost together with no problems and camped the night in a field on the edge of our first Turkish village. The difference between the two countries was stark. Now everyone greeted and waved to us and the cafes beneath the minarets were full of old men drinking tea. We left Fabian in Kerklareli as he was going south to the Marmara sea (and alot faster than us) and turned East.
We were now cycling through alternating plains, valleys full of sunflowers and vast, oak forrested hills with towns 30 or 40km apart. Going through one small town a car door opened as I rode by and ripped off a pannier, no harm done and the guy was appologetic but the tea drinkers on the pavement were a little cross with the fellow and insisted that we sat a while and drank some tea. One of the guys ran the bakery next door and kapt bringing us hot cakes. The school English teacher appeared within a few minuits and translated to the small gathering of children and old men who wanted to know all about us. 'We love tourists and get quite alot coming through here' said the English teacher, 'just last month we had a pair from Holland come through on motorbikes'. It seemed they had recieved the same hospitality. Reluctantly we moved on as the day was still young escorted to the edge of town by the kids on thier bikes.
The weather was hot and the road, though fast for the first hour soon got hot. The tar melted, stuck to the tyres and picked up stones which were then scraped off on the mudguards. The hills though not steep were long and constant and we had for a few days a headwind. Sometimes we just didn't roll down the hills. The scenery though was great and there were very few cars.
We met a cyclist from Istanbul on his way to Bulgaria and he was having a similar time of it. He advised us to head south as the road only got worse. We asked him about the traffic on the southerly road coming into the city and he assured us it would be no problem. He mislead us somewhat.
I have cycled in a number of the worlds major cities: Mumbai, Bankock, Ho Chi Mihn, London, Rome etc and rarely find the thick traffic dangerous. Coming into Istanbul on a friday night past the Airport the way we did was a different story. We had a plan and it was potentially a good one. On our detailed map were a number of campsites marked on the coast before the city real began. We thought we could reach these before sundown, stay in one and head into town the next morning. Best layed and all that, things went wrong when the campsites didn't exist any more. One did exist but everyone directed us to a different location and as the sun got lower we were getting a bit desperate. Unnavoidable and dominating our lives at this point was a six lane highway where the cardrivers imagined we would vanish somehow into thin air if they drove straight at us at speed. Those trying to enter the road were the worst. I called a halt eventually, It was too dangerous, we were going to get hurt. A hotel was spotted we gave up on the elusive campsite.
With the bikes safe and with the security of somewhere to sleep we ventured more happily out into the neighbourhood which was vibrant. Everything was going on and we liked it. A different world from the tourist disneyland which is the area we are staying in now.
The next morning we dreaded getting on the bikes again but the traffic was much quieter and I was reluctant to giveup and find a big taxi. Luckily after 10 minuits we made it to the sea and followed a quiet road which turned into a cyclepath which lead us the 15kms into town. Things were looking Up.
On the way in we met a german couple on bikes heading for the ferry port. We drank some tea together and they told us a good place to stay. They had had their bikes stolen on the train in Serbia, alot of thier kit also. After a three week wait they recieved new bikes from Germany and though a bit lighter in the pocket area were continuing their trip to India.
Istanbul is, well, its Istanbul. 16 million people, beatuful and ugly, chaotic and tranquil, easy and difficult, boring and exiting, cheap and expensive and so on. I advise a visit if you have never been. It seems alot more modern than it was 15 years ago when I was last here but the ancient and new still live side by side.
Must pack and leave now but wıll wrıte a short cıty chapter ın a few days. Vısas for Iran are underway.
Posted by BikeBlogger at 23:59