Tehran and the South 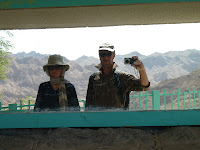 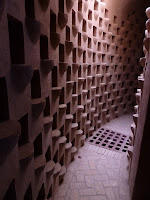 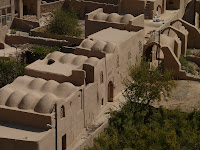 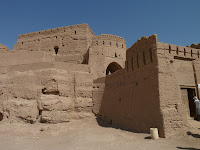 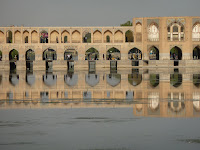 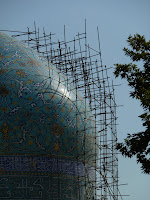 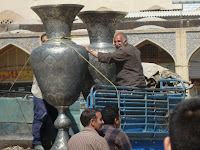 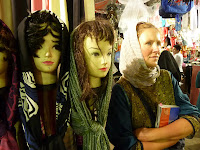 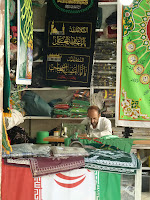 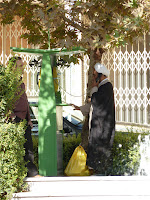 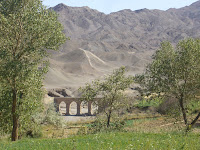 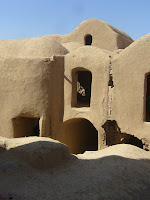 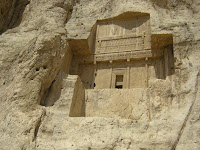 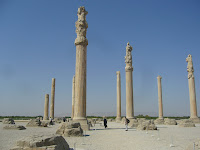 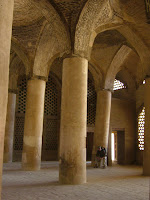 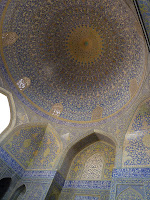 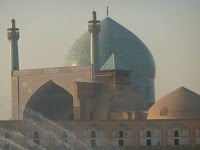 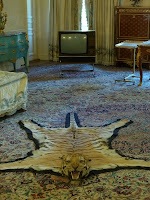 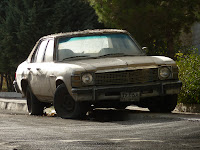 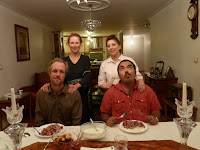 We don't like the big cities much, but we were in Tehran for two reasons; to get a visa for India (yes we could have arranged one before we started but it starts from the day you get it and would almost have run out by now), the other to visit the sister of a friend (friend of mymother really) who is our first 'contact address' since Germany.

Staying with Manije, Mojtaba, Alireza (popular name), and Sebhare was fun and we enjoyed it immensely. Alireza who is 18 took us around town for a couiple of days and looked after us totally. Even helped us to cross the road. It was somehow nice to be so taken care of. We visited the old Shas palace and surrounding museums. All tigerskins and '70's Tv sets.

Getting the visa was a different story and I will not go into all the very boring details. Or shall I? No. Or? ....No.

It seemed that Catch 22 was mandatory in this process and we would never be allowed to go to India which is normally a simple process. At the same time we were trying to extend our Iranian visa and reserve a flight. Same rules applied. We could not do anything in the natural order and if we bought the plane ticket and got no visa we were stuck as we had no money for a second ticket. (no credit cards or cash maschines work for foreigners. No access to money).

We had decided against going through Pakistan.The obvious reasons and also the visa for Anja would have been difficult. The Germans do not want their people going through right now. Bieng a dual Nationality couple doubled the complexity here with the visa thing. \par

It seemed we had to do all this in Tehran (visits to British and German Embassies etc.) so we decided to leave the bikes there and tour the country by bus and come back to pick up new, shiny visas and hop on a plane. Best laid and all...

Appologies to all cyclepurist readers. We can change the blog name to 'bybikebusandplanetosydney' if you feel we have let you down. Writing in retrospect I wish we had taken the train. I hate flying and we feel now like the trip has been divided into two parts. Unfortunately we might have to fly from Kathmandu as getting to Lhasa is not allowed outside a too expensive tour group. We will see when we get there.

Isfhan, Shiraz and Yadz. Very impressive, interesting and unusual respectively. Yadz I liked the best. A desert city made of mud. Small brown alleys with black cloaked women scuttling in the too short shadows, bazarres which were just that and a minority of Zoroastrians and Afganis.

We travelled by night bus and in Shiraz met Patrick and Peggy. German cyclists we had met very briefly in Istanbul. An upbeat couple who had cleverly decided to fly to Kathmandu from Shiras and avoid Tehran and the India visa problem. We considered this but the flights were full and after fighting against so many people 5 or 6 times just to be seen (no queues here it eveyone for themselves and hard for a mildmannered and polite Englishman) in the Indian Embassy we wanted to see this visa thing through.

We had a good day with Patrick and Peggy and felt a little left behind when we saw them off to the airport and took over their hotelroom. I guess our paths will cross again somewhere.

In Yadz though we stayed in the Silk road hostel which was for us luxury accommodation and we met alot of travellers. Kevin from London, Susan from Scotland some nice Korean guy and Kate and Tim from New Zealand.

Also a pair of English girls on bikes who started in Istanbul. They had a map of S and E India, we had one of the NW so we fotocopied.

The bus to Yadz broke down three times. Transmission problems. The guys fixed it twice with only a hammer a knife and a piece of rope. All the tools they had. I helped pull on the rope though what part it was attatched to I'm not sure. This was a day bus as we wanted to see some scenery but ended up being in the dark. Finally the crew gave up the fight and said we were going no further. Everyone off. Luckily we were on the edge of town and shared a taxi in with some French Canadian guys.

Perhaps the highlight of the trip was visiting Persepolis. Partly reconstructed ruins with many perfectly preserved statues and relief carvings. Showcase of the old persian empire.

The problem with buses is that we lost all connection with the landscape. Dotting from city to city is fine for seeing all the sights but though we knew we were way south in Iran we had seen little on the way. The train back to Tehran was more interesting through the desert but looking through the sealed window one could taste no dust.

We did make guided tour into the desert to see a Zoroastrian shrine and a deserted village which was interesting but we were missing the bikes.

Back in Tehran we were back to the Indian embassy. No Visas. Luckily we were still welcome to stay with Manije and family. We were cooked for and everything. Fantastic. I forgot to say that before the bus trip they took us to a wedding. It was in a walled garden somewhere off the motorway. No headscarves, dancing, singing and all. I think the fun police had been paid off.

Without this fantastic family our stay in Tehran would have been much much harder. It was hard to leave what had become a home from home. Very generous people.\par

We made a trip by cablecar to the top of Mt Tochal with Sepehr our 12 year old tourguide. At Almost 4000m we were in Irans Skistation and looked down on the fuggy city of Tehran below.

I was beginning to believe we would not be able to leave Iran. Always another problem. Flying with bikes is always a worry. Will they let us on? are we too heavy? must we really box the bikes. I was getting a bit worn out by the process and at the airport admit to being a bit stressed. When some official says 'No' you cannot take the bikes. That is it. They said 'No' you must box them. I hate this as no-one knows there is a bike inside and they get thrown around but box them at the airport we had to.

Iran was a Great country in which to cycle. I reccommend it to all. I don't feel qualified to opine about the pro's and cons of a Muslim regime. The headscarf thing is not really a problem and seems only a symbol for greater restrictions on freedom. All I will say is this - I reckon the revolution thew the people out of the Shah's frying pan into an equally hot place. Perhaps, as with the Tzars of Russia, after time things would have got better with the Shah and revolution introduced a new hard regime and progress was effectively set back. Perhaps not. What the Iranians have, like all Nations, is a fierce pride in their country irrespective of their Government.
Posted by BikeBlogger at 00:56