Land of the Monkeys 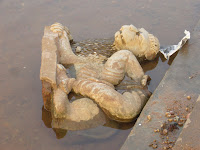 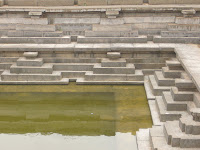 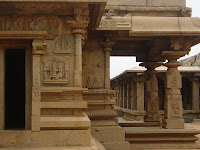 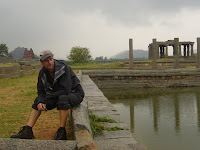 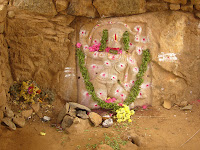 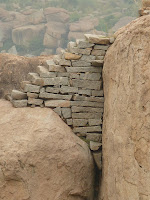 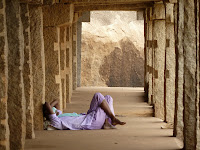 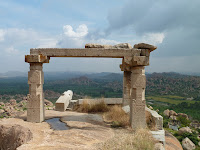 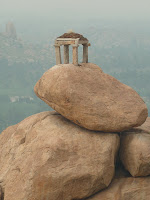 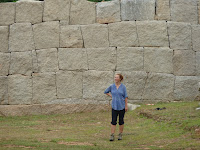 So we crossed into Goa. As we rode onto the car ferry across the river two cyclists sped round the corner and came aboard just before the ramp was pulled up. Dave and Phil from England. Well Phil lived in Thailand and worked in France but was English. This pair had come the same route as us in about half the time. We found the first guesthouse and had dinner and beers together and a great breakfast in the first (or last beach cafe in Goa). We enjoyed the boys company and decided to leave before they did so we didn't feel left behind.

Anja had dreams of a bamboo hut on the beach. Thailand style. Clear waters and pristine sand.
We found a bamboo hut 20kms down the coast in the first beach resort if you can call it that. A damp rotting hovel in a backstreet in a dirty town behind a shit and litter-strewn beach populated by surly dreadlocked Russians and Israelis.
Why do people come here? The party scene is apparently a thing of the past or a mere ghost of its former self and each of the beach towns we visited was like the worst of the Indian towns with a load of touristy crap added to make it even worse. I don't understand it. Just out of Goa, in Maharashtra are some beautiful beaches and better towns and not a single paisty face in sight.

To Make it worse it really rained. bamboo huts are not waterproof and we slept under drips and I caught a cold. We headed for Panjin biggest town around. An old Portuguese harbour town and charming in a dirty rundown sort of way.
It poured again but the old Pork and Cheesers were clever enough to overhang their roofs enough so you can sit in a window balcony, Kingfisher in hand and delight in the deluge. First clean room in India for us.

We decided to head inland to Hampi the ancient Hindu capital, A trip which looked easy enough on the Map. The reality was otherwise. First day was a long but gentle enough wind up the Western Ghats where the air smelt of burnt brakes and clutches. On every other bend was a highly decorated truck with its oily innards on the road underneath and the sleeping crew awaiting parts. On every other the fallen and abandoned heavy load, left to multiply the goods carrying mishaps. The road was not busy.
A wierd truckstop lodging, some long overdue bike cleaning and confusion the next morning. The direct road was apparently 'no good, no good', advice from all, and we were directed down the jungle road. A narrow stretch of impressive tarmack that wound through a tiger and Elephant reserve and turned out to be one of our nicest roads yet and only twice as far as the other way. I was sharply brought out of my frustration in the belief we were going the wrong way (The Compass had sadly lost its spirit in the journey) by Anja's call that something was amiss with her steed.

The back wheel-rim that had a dent straightened out in Mumbai was fatigued. We were all tired but this rim had cracked. The good road had tempted me to squeeze a few more psi into the tires (and a few more kmh out of Anja) but the force had broken and bulged the alloy and it was bashing the brakes and going to worsen.\par
As I swapped gear cassettes and put the afflicted wheel on my bike, I would ride with no back brake, a hollow sound in the forest made us turn our heads. A largish tree was waving from side to side and its sinews cracking under the strain. Great, not only had we serious bike problems but we were only yards away from Elephants. We could not see the beast for the thick undergrowth but you've never seen a wheel go back on a bike so quick. On my last trip to India, Jenny a friend I went with was chased by Hefalumps and didn't find it too funny. We didn't mention Tigers.

Trees grew thick over the thin black ribbon on which we rode and spiders the size of my hand, escapees from the Lord of the Rings film-set strung their nets between and above us and sat silent, one after the other, waiting for birds or bats or monkeys or other more worthy prey.

Jungle eventually gave way to thinner bush and agriculture. We limped into Dharwad and located a possible decent replacement rim 20kms away in Hubli. Luckily our direction. At 9am we were waiting outside Firefox bikes, apparently the only stockists of European style bikes in India. We were at the only outlet for 500kms. What luck!!
They would not sell us the part. The only ones they had (I have never been so pleased to see a Chinese trademark) were on 300 dollar bikes and they would not give us one. Kindly one of the guys took me to a different street and 'Hero' bike shop. As I waited for it to open I had no great hopes but they had one show bike with alloy wheels and for the grand price of 600 rupees (10 Euros) would remove it and build the rim onto my hub. We were close but not out of the woods yet. I upset the Mechanics by trying to insist they gave me the part and let me build the wheel, they had the right tool. No go, as one of the boys attacked my bearing nuts with a wrong size spanner intent on letting the balls fall out to roll away in the dust my pleading that he stopped fell on deaf ears. After I had smacked his hands and had an oily rag thrown at me (impressed them with a good cricket catch) we came to an arrangement; the bearings would be left alone but he could build the wheel and I would bugger off while he did it.
We pushed the bike to the nearest hotel and spent an hour or two re-doing the job, a 36 hole rim with a 32 hole hub posing no great problem with a bit of thought.


The next afternoon a motorbike rode by and stopped ahead. It was Matild and Elias on the silver Bullet who we had met on the Konkan coast a day out of Mumbai. They would reach Hampi that night, us the next morning. Koppal was a bit of a dump but had a fantastic castle. The road to Hospet was nose to tail mining trucks on a degraded surface, the second suchlike since leaving the coast. We overtook the trucks on the dirt strip left to us on the inside.

An extra cup of tea was promised to the first one to see a tourist and I thought I had won in the penultimate village as a burly Englishman hailed us from accross the road. I was wrong but not disapointed. This was Greg, a writer who had lived in India for 20 years and invited us home for a cup of tea. Greg had escaped from the pages of an adventure book of the Conrad stable and it would be depleted by his departing. Drop out was his self-description and living with the gypsies with a local wife and children in this middle of no-where place earned him this title as much as his prolific and intellectual writing destroyed it.

We spent the next few days with him, riding off into the bush and scrambling up this boulder landscape to hidden temples overlooking a city that 500 years ago was as big as modern London. The granite formations were belched from the fiery belly of the Earth to cool and be split and carved by millions of Hindu hands into temples and shrines, water-tanks and aquaducts, monkey gods and paved roads. There were streets for gold and streets for jewels. There are still 7 mighty walls that slither impossibly over this 3 dimensional landscape. We climbed up teetering flights and crawled over fragile bridges made by hurling rocks between 100 ft high pairs of boulders until one jammed in the gap and could be added to. This was is the land of the monkeys, of Hanuman, the land of the bears is the distant hills.

Greg seemed glad of our company as it enabled him to visit some places even he cared not to go alone.
'There are just too many things to die from here'
he reassures us as we head off up yet another thorn overgrown and forgotten path, tripping over half buried cow carvings and slipping on rocks. I lost my bearings hours before and am careful not to lose him.
'And the Happy Clappy tribe don't help'
The name sounded like happy clappy to me but these were no nice guitar strumming christians. Apparently they come out of the wildlands to the East occasionally, killing and hauling off as many animals as possible and the odd murder is not out of the question.
'Nasty, terrible people we don't want to run into, and you don't want to break a leg out here there is no help and 55% of the dogs have rabies and there is a Malaria epidemic at the moment'
Slow down a bit mate, I thought as images of dying a painful death in a so foriegn land flooded my mind. These cold sweat thoughts were accompanied by those of half faced monkey gods and cackling gypsy witches waving snakes and scorpions above their heads. I so wanted to see Dartmoor once-more. It helped when I sat in the shade awhile.

An atheist like me has no place hanging out where gods hold so much sway. When I die I hope it will be comfortably disbelieving, in a land with a more familiar religion.
Posted by BikeBlogger at 05:39