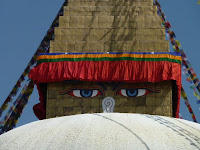 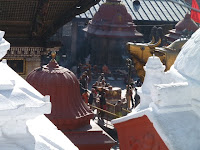 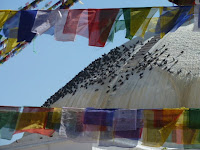 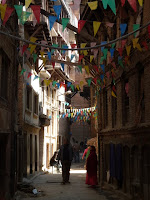 We are stuck in Visa limbo-land trying to way to cycle into Tibet. There are worse places to wait than this city of a thousand temples. Our well lit 2nd floor apartment gives on to a small but busy square, and we already know the daily routine therein. We also have our own.
I venture out early to buy bread and milk for breakfast and often sneak in a cup of tea on the street somewhere. We eat at a small table in a window watching the passers by. At 8 o'clock the music store opens its doors and the sounds of chanting monks, sitar and wooden flute, after being reluctantly cooped up for the night, are let out to flutter around the square and explore its many nooks. This Nepali music is not unpleasant but is alike sounding and a little monotonous. Sometimes it seems the city has its own theme tune played on a continuous loop.
The egg-man crosses the quadrangle diagonally at 8.30. eight trays of eggs stacked in a cube hang from each end of a bamboo pole set obliquely accross his shoulders. He moves a little crabwise, the bamboo flexing with each step, and disappears down an alley. The early beggars and hash-hawkers shuffle into view, old men pass their hands over the octagonal shrine as they go out of their way to pass it clockwise. A stooped and bearded man pours oil over a buddha statuette which is surrounded by a railing with a potted plant in each corner. Siddhartha has his own little haven.
The first dreadlocked tourists appear as the cafes open their doors; the Penny Lane Cafe, The Snowman and Little Wings, hangers on from the hippy era when Janis, Jimmy and the like reputedly stayed around here. Hence the name: Freak Street.
Today is a public holiday and the children stop the light traffic with ropes strung across the narrow streets, amicably demanding coins as a toll. A Kathmandu congestion charge. The smarter class of Saddhus, orange clad and bearded with shiny stainless pails walk slowly by in pairs. On the edge of the city a Hindu festival is underway at the temple complex of Pashupathinath. We are told half a million pilgrims have decended.
Not being so keen on large crowds, we visited the temples yesterday. The place was already busy, warming up for the major event. We cycled out with Sophie and David our new cycling friends from Australia. On the way we stopped at the giant buddhist stupa at Boda, a tranquil circle flanked with fine and almost European houses with the great white pudding suet pudding stupa in the centre. Monks drank tea in the surrounding cafes. The simplicity of the prayer wheels and flags is appealing to me. In stark contrast was the Hindu Pashuphathinath down the road.
I thought we had escaped the Saddhus when we pulled out of Rishikesh. Not so. (If you keen only on what I have heard called "culturally sensitive travel writing" please skip the next paragraphs).
The place was a seething mass of dreadlocked dope-smoking bearded half naked and painted "holy-men" begging, bartering and trying to dob a dab of red stuff on my forehead. After paying a hefty sum as a non-Hindu to enter the place i felt unabliged to partake of the flower-buying, red-dottind scams. Nor pay to take a photo of some guy smoking a chillum. I guess the paradox of giving up all material goods means most of your time is concerned with re-aquiring the simple basics.
We reached the sacred rubbish dump that was once a river running through the "Ghats", stone stepped banks that lead down to the meagre flow of rancid waste. Here rows of dead are burn on wooden pyres. The thick smoke mingling with deafening music and stench made an atmosphere one could cut up with a knife and keep in a tin. Lepers and otherwise stricken folks lined the avenues. They had come here in the hope of healing and I guess some help from the throng of pilgrims. The temple-carvings and shrines dipped with black oil, fat and vivid powders. The scabby-arsed monkeys ate chana and rice from plates.
If I must, in a fuure re-encarnation return as a religious man, please lord, let me be a buddhist not a hindu.
Returning to Thamel, the shopping and tourist enclave, a maze of small streets, shrines and alleys, we drank Tibetan hot beer then went to the chic "New Orleans Cafe" with live music and coctails. Anja and I returned to our district through darkened, closed up and largely empty streets of a city under powercut.
There is not enough electricity to go round in Nepal, a country with enormous hydro-electric potential, so load sharing power cuts are the norm. Somedays the lights dont go on at all. Running a business here is hard.

We keep running into old freinds from the hiking trai in this small and friendly city centre. I admit, although I am anxious to cycle forwards I am enjoying this lazy time in Kathmandu. It is also good to cook our own food for a change and thereby lower our fat and salt intake a little. We should soon know if we can proceed to Tibet by cycle in April or not. One advantage is that it will be warmer then and we may be able to leave behind a few kilos of clothing.
Although there is little street lighting, Kathmandu is one of the most modern, western orientated cities we have seen for a long time. Particularly as far as shops and goods go. We have not seen such a variety of modern goods since Tehran. There is here a few bike shops the like of which we saw last in Vienna.

A doubled over porter under a giant bound up parcel crosses the square below, his load supported by his forehead. The vegetable man stops, puts down his laden pole and sells a bundle of fresh leaves to a man and his son. The sun has left the uneven paving slabs and the afternoon shadow is pushing the sunshine rapidly up to the gardens, washing-lines and building sites of the roofscape. Soon it will be dark and unless we are scheduled for electricity tonight, only the headlights of motorcycles will fleetingly light up Buddhas little enclosure and make long shadows from the passers by. The shops will shut up one by one and a last, slightly self-conscious tourist will step through the shadows into the feint light of the corner store, buy two bottles of beer, then return whence he came, a candle lit window above. The last night-walkers will fade away and the street dogs will creep out into their nights domain.
Posted by BikeBlogger at 04:38