Valley of the Lost Yak. Langtang 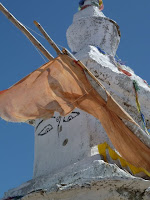 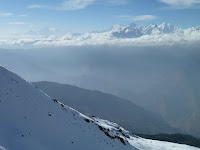 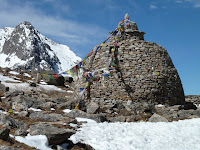 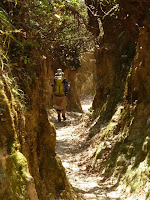 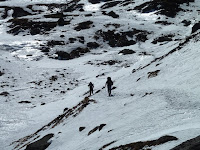 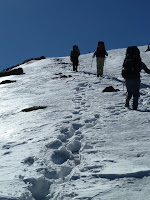 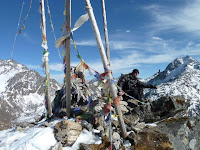 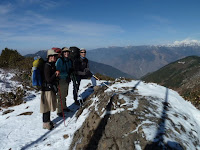 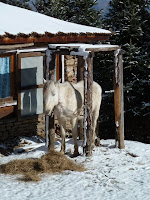 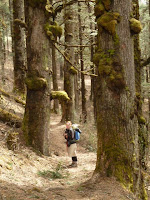 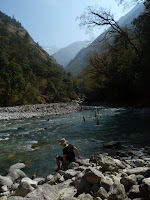 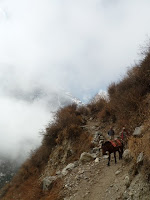 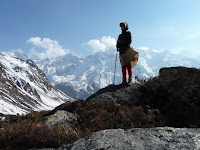 Into the valley of the lost yak strode we, once more tward the 5000 contour. Our backs were sore and our windsacks full of mica-dust from a day-long ride on a bus. Two days walk saw us into the hills where a gale pinned us down in a hut. The air was thick with flying tin roofs so we tied ours down with stones and rope and lashed the ridge to the cold iron stove. A feverish storm was racking my guts as I shivered and puked under a foot pile of blankets, praying the roof would hold. Every house in the strung out village had a man ontop hastily banging in nails. The triangle here is not generally used in building so squares are parallelograms and everything moves in a wind. Half the next village had lost some roof we saw as we carried on up the valley.
Above Kanjin gumpa is a page from a scool geography book. Glaciers, cirques, morains and drumlins. The mountains are moving. The great plate of India is still thrusting its way into China forcing up the Himalaya and Tibet. There is more than political tension at the borders. Erosion here is tangeable, you can hear it in the crack of ice and rock. It sounds like distant guns. You can see it as scree tumbles down from the cliffs above and the evidence of fresh landslides is clear. The noises here only accentuate the silence; the rush of thin air over a Golgen Eagles wing and the dying groan of a glacier who knows its glory days are numbered.
We lived on rice and lentils and noodles cooked up on our petrol stove. Porridge for breakfast. We were cast away with Swiss family Robinson and set off one morning with an up beat Down Under pair, Mark and Jenny, to the frozen lakes of the Gosainkund. Another storm once more up high left a covering of snow. I have never before experienced hail falling hard between the swirling flakes of a blizzard nor thunder, lightning and snow together. In sunny weather and good company we set off next morning through the ever deepening snow cover which was luckily frozen hard. A cold night at the lakes then over the Laurebina pass and down again in search of trees.
All seems fine on a clear blue day but some years ago an Aussie young man lost his way on this very trail and was not seen for 43 days. He turned troglodite and was finally found still sucking the wrapper of his single Mars bar, no doubt contemplating his demise.
Another weeks walk took us through ever warmer hills back to Kathmandu through the Helambu. Red Panda territory, small bamboo and Rhododendron. Maybe they saw us but we saw none of them.
Most goods are carried up here on the backs of porters. A normal load is 50kgs 60 or more is common. We saw a man some days from a road with 6 full sheets of plywood suspended as usual from his forehead. Nepalis are not big but pound for pound the porters must be some of the strongest guys in the world.

We expected to leave for Tibet on the 2nd April but returned to find that travel permits were not being issued yet to through travellers. Days running round embassies and offices revealed a confused picture. It seemed that possibly in 3 weeks we could go to Tibet on a bus and take the train to N. China but no-one could say if or where we could convert this 15 or maybe 20 day permit into a chinese visa. The travel agents said yes but knew not where, the Embassy officials laughed and said maybe but they doubted it, and all internet forums and suchlike said it was definately not possible. We could get a chinese visa in Kathmandu but it would be ripped out on entering Tibet.
I was not too concerned about outstaying Tibet permit but it seemed that we would be left in China without a visa and with only a few days to get to Hong Kong or Laos thousands of km away. Not easy on a bicycle.
Sadly we cut our losses and decided to fly once more. This time to Chengdu in China. We will then head west and south into the wilds of Sichuan and Yunnan.

It seems our trip has turned into one of many chapters instead of a continuos cycle. We are dissapointed but wanted to ride through India and walk in Nepal which made things awkward. Fingers crossed we get a China visa on the 6th and fly on the 7th. What can go wrong. Anja is utilising the time to design some clothes for her old company and I am pootling round the town on my bike googling at all the shiny equipment in the hundreds of outdoor shops.

We have been now 6 months on the subcontinent and have seen a sight or two. I am jealous of Anja having some work to do and am looking forward to the last leg south (thats downhill right?) towards Australia.
Posted by BikeBlogger at 01:56