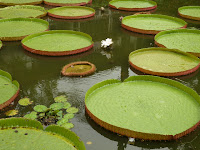 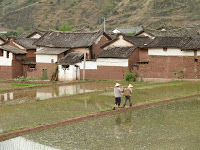 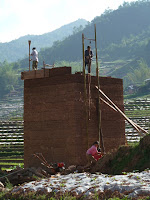 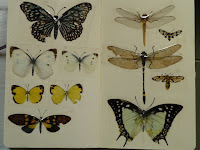 In the rice fields bordering Erhai lake it was planting time. The bright green, lush lawns of seedlings were being uprooted, packed into baskets and loaded onto backs, bicycles and tricycles for the short journey to the flooded paddies. Men bunched them into small bundles and threw them at expertly spaced intervals into the shallow water where groups of somehow clean and colourful women would deftly plant them in rows along a double string measure.

Everyone was shin deep in mud and water. Rotovators crossbred with paddle steamers played alongside buffalo, straw-hatted drivers suspended out back on a cast iron tractor seat and splattered from shirt-tail to toe. Young men wade waist deep in the lake collecting green weed. Further East in China there is a drought. 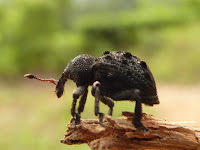 The villages are deserted as everyone is in the fields. Every white painted house is adorned with murals depicting landscapes and wildlife and we have the narrow streets almost to ourselves as we ride along the lake shore toward the distant pagodas of old Dali.
After a surfeit of 'Old China' in Lijang we had little interest in the sights of this pleasant tourist town but we met an entertaining pair, Sharon and Steve a Kiwi and an Englishman who seemed to have perfected the art of backpacking with bicycles. 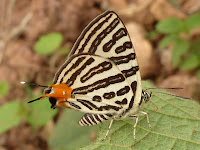 From the lake we climbed up once more then had a flattish run and spent the night in a great old town called Waishan or something similar. Eating steamed dumplings in a shaded square, we met a man who swore he was a hundred years old. He walked twice daily round the perimeter and spoke at length with those he met, us included.

We were riding through heavily forested mountains, down and up small river valleys and over low passes. Our collection of maps bore little relation to the topography at times but the network of roads was sparse and it was hard to get lost. There are remarkably few roads in these parts and away from those there are must be pretty wild. By foot across country would be the best way to travel. The tribal outfits seemed to change almost daily.

One morning we woke up in the tropics once more. The thermometer rose over 30 degrees and bananas fought with canna for space under the jungle canopy. Unseen armies of cicadas sharpened their scythes all around us and helped the fretting crickets to beat and churn the hot moist air into a soup thick enough to tempt hand-sized butterflies into braving improbable flight. The warm arboreal blanket pulled over the wrinkled, sleeping bodies of the mountains was torn in places by rice or tobacco farms. These tears had scoured away the Earths green skin leaving open and unhealing wounds to bleed the lifeblood of plants into the Devonian-red river. We followed this river for some days as it slid guiltily along the valley floor, laden with silt and the broken dreams of forest trees, drawn, inexorably toward the mighty, indifferent Mekong . 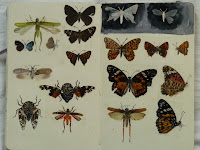 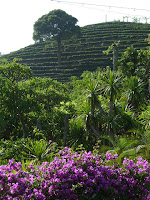 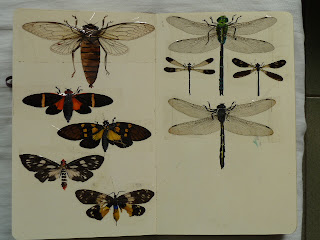 It takes time to travel where there is so much life going on. Anja is always behind. I turn back only to find her crouched over some poor, flattened creature, taking photo's for her future 'road-kill' expo or stuffing hapless Tettigonids ( bush crickets) in her lepidopterists collection box. She spends campsite evenings after noodles and coffee carefully sticking her specimens in a rapidly fattening book. To date she has discovered two new species; one an insect of paradise, a springer with a plume of white feathers, the other, some kind of worm with its own disc-house, found in India, so strange I reckon it rode in on a meteor or stowed away on a space-ship from another planet. We will of course present these discoveries to the Natural History Museum, London, in due course, assuredly to much acclaim from the scientific community. In fact, I think I saw the wormy thing first so it should be named after me: 'Toms Worm' or 'Franklinoptera'. Sounds much better than Anja's Bug or Lesser Spotted Bollmannid....finally an invitation to the entomologists ball.... National Geographic....Blue Peter....John Cravens Newsround..!!! I must be careful though or Anja may publicise my less than heroic antics when I discovered a leech latched onto my foot, happily sucking out my much needed corpuscles.
Traffic has been light this last week. We admired a passing motorcyclists bamboo basketwork safety helmet and were wondering about its pro's and obvious con's when we came round a corner to find said fellow and bike prostrate in the middle of the road. No serious injuries it seemed, lucky he didn't hit his head. We picked his bike up and hundreds of seedlings that had spilt from his over sized basket panniers. I think he had swerved too sharply to avoid a pothole and with so much weight onboard, lost his balance. Further along a truck-driver needed help tilting his cab forwards so that he could get to the engine. Our good deed day. 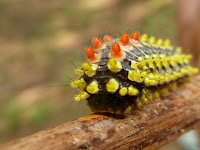 After a rainy day in a town named Pu er we climbed up into tea-garden mountains. I never considered much the implications of tea drinking but the jungle is being cut down and replaced with plantations both large and small. Its tea or trees it seems. Guess who's winning. 'Hug a tree, don't drink tea'! (sorry Ma). Some clever fellow once said something like 'Science is the faith of man in the ignorance of experts'. I slip this little nugget in here because, though I have most likely mis-quoted and forgotten who said it, I liked it. It can be taken a number of ways. The experts, the biologists, the earth scientists, the climatologists tell us felling all our little planets forests is a bad idea. Advice based on what they do know. Imagine all the consequences they don't know about. Deforestation may not cause any serious problems to life on Earth, we have already done away with so many trees and survived, but I can't help thinking we are making a far bigger mistake than we know, than we can imagine, far worse than the present science indicates. We are going to look pretty foolish when we learn that it was the moving shadows of the trees which pulled the sun each day across the skies. Here they would call me a" Panda Hugger" , sorry to go on so, but a new hole in the rain-forest is the starkest reminder of the follies of man.
In a town who's name we never knew we took a room in a hotel. Guest-houses and hotels are such good value in China. Four or five Euros gets one a clean and bright room with bathroom and hot, mostly solar shower and a big shiny TV. The staff are always friendly and the food really good. On this occasion we were dragged more than invited by a drunken chief of police to his daughters 23rd birthday meal in a private room out back. The food was fantastic, apart from the chickens head picked out of the soup and ceremoniously dumped on Anjas plate. Had to happen sometime. The drinking culture at such an occasion seems to consist of constantly filling someones glass from an endless supply of beer and spirits, standing and randomly picking a victim with whom to clink glasses and down drinks. This goes on and on and seems more important than eating.
We had no common words but had a great evening. I was ready for bed when the youngsters announced we were all off to a Karaoke club. I hate this sort of thing and was already half cut but in the interests of cultural research we said we would tag along. A short walk brought us all to the club. Up some stairs to a dimly lit corridor we were shown into a smallish empty room with a TV screen and singing machine with microphones, about 50 cans of beer were then aligned carefully on a low, long table in front of a bank of sofas facing the screen. Our group was down to about 8, the oldies having ducked out and we were alone in the room. The girls started singing along with videos and dice were produced for the drinking game. Anja sang well with Britney Spears and I mumbled something quietly half a bar behind a youthful Micheal Jackson. As easy as ABC it was not! I figured my best bet for survival was concentrating on the drinking game so I would not have to sing. Rock and a hard place. My head was already spinning from the dinnertime session and the dice were not being kind. Birthday-girl passed out first, the boys seemed to spend more time singing, Anja threw good dice and I seemed pitted against some slip of a super-model girl who was definitely out to win. She did. All that lovely dinner went down the drain.
We stumbled home and had trouble recognising our Hotel. Next day we nursed our heads, ate mostly mangoes and bananas and managed only 30 odd kms uphill through the woods. Cultural immersion sometimes hurts. 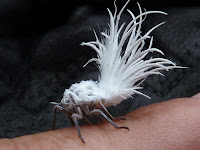 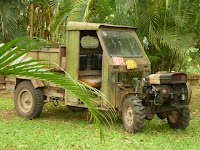 A small amendment to the above. The red river we followed, though at one point only a hill away from the Mekong, on closer inspection of our inadequate maps flows into the Black River in N. Vietnam. Here,where we are, it is hot and wet but the middle and lower Yangtze basin, whose upper regions we left a few weeks ago, is suffering a terrible drought. It is the worst in half a century and is effecting almost 40 million people.