To the ‘Gorgeous Leapy Tiger’ & Lijang 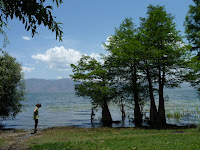 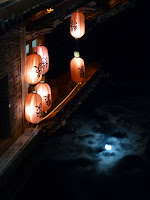 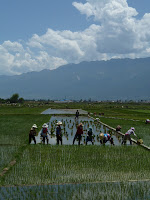 The road from Lu Gu Hu to Lijang turned out unsurprisingly to be a beautiful ride though hard. We started over a mountain where roadworks and a temporary track left us pushing up so steep we were sliding backwards in the dust. This turned to a winding cobbled street up and over a pass. Fabulous road, but it shook all our nuts and bolts loose on the descent. (maybe we had a few loose already).
The houses turned from log to rammed earth and pine-framed, with the odd stone or mud-brick. All of similar, practical and appealing design.
Crossing the big yellow river and climbing up the other side of the valley through nectarine orchards was a day to remember. All our camping spots had been good, but a narrow terrace clinging to the valley side with the river an unguessable distance below, topped them all. As the moon traded places with the sleepy sun we cooked our noodles with the last of our gleaned ognions and ginger. We slept once more with our re-found friends the stars.
Somewhere on this journey we were informed that we were in the most beautiful city on Earth. I forget now where it was. Lijang could boast this if it wanted, and I would not argue. It is these days a tourist town. I would say 'Disneyland' but the 'Fakes' or new-builds after the Earthquake of '96 are built in the style and materials of the originals along the same meandering canals. The details of the woodcarvings and the craftwork in the shops is astounding. Usually I hate this sort of thing. I love this town in the shadow of the Jade Dragon Snowy Mountain. 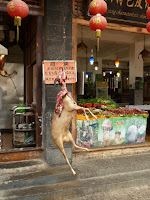 We took a walk up Tiger Leaping Gorge. The Jainsa River (I’m sure it's the Yang Ze) itself at about 2000m above sea level here, cuts a gorge at the foot of a mountain range so a rock wall rises almost 4000m to unusually shaped craggy and snowy summits. A goat-path winds its way along the opposite hillside which we followed for a couple of days looking down at a small brown river below.
At last we descended impossible trails and ladders to the muddy tumult. Maybe 30 yards across at the narrowest point, small it was not. The rapids were the most ferocious I have ever seen. No happy laughing rafting outfits here. Un-navigable in the extreme. You could toss in a 40 ton truck, fully laden, and it would disintegrate and disappear in seconds. Legend has it a Tiger once leapt across from a flat projecting stone. Legends are great. So is this pace.
Back in Lijang, we head South tomorrow. Non-stop to Laos before our visas run out. 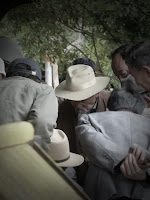