If I never see another Palm Oil tree.....

It is almost like being in India, the conversational patterns are similar:
‘Good evening sir my name is Joseph’.
‘Nice name.’
‘Yes I am a Christian; my great grandfather came from India.’
‘From Kerala I suppose?’
‘How did you know?’
‘I didn’t.’
‘Are you a Christian too?’
‘No I am a Cyclist.’
‘I have never heard of this. Is your wife a Christian?’
‘No, she’s German.’
‘Ah, a Nazi.’
‘No, a Communist.’
‘An East German then?’
‘How did you know? Two Masala Dosa’s please... and some tea.’

Joseph had a large handlebar in hair above his mouth and a twinkle in his eye. I assumed he thought he was humorous as he explained that if the British had not come to Malaysia, bringing the Indians with them the natives would still be,to paraphrase, doing gymnastics in the forest canopy, and not governing one of the most developed nations in Asia. I tried to guide the conversation onto more P.C ground but the popular topic of the French submarine surfaced once more and off we went again.
Apparently the Malaysian government bought for its Navy a submarine from the French for 1 Billion Ringgits (a lot of money) and this was controversial before it was discovered the damn thing wouldn’t sink. A U-Boot that refused to do the U bit. Johnny Frog shrugged his shoulders, handed out a few Breton shirts to senior officials and deposited the check with Credit Agricole. I found it hard to understand all the rumours though I believed them all. One of them has a Mongolian girl, a broker, they say, being blown up by the powers that be. I have begun writing the screen play for Hollywood; it involves a motorcycle chase through a palm oil plantation, a gun fight in Colonial Malacca and in the final scene the submarine finally going down in flames.  Joseph is hoping Sarawak and Sabah will help swing the vote in the next election away from the Malay, Muslim led government towards an Indo-Chinese coalition or some such.
Who needs newspapers or the internet when one can learn the latest in an Indian restaurant?
I say almost like being in India. Every town here has a ‘Little India’ which Anja describes as ‘India for beginners.’ It is just the same but with more powerful light bulbs and some health and safety regulations which eradicate the tripping over black pigs in dark streets problem, though a part of me misses the little swines. The hotels are run by cleaner versions of the Indian young men who, I was pleased to see, also spend their days sleeping on the guest-beds and appear to be doing every little job for the very first time. Eat with the Indians, sleep with the Chinese. That’s my advice for Malaysia. It has been Ramadan so the Muslim Malay establishments have been mostly shut. Now they are open and the food is great.
We were hailed one day from the roadside and invited to eat with a Malay family all dressed up for Hari Raya Haji (look that up on Wikipedia, it seems to be the big party after the fasting month of Ramadan). I think these folks get my vote for best dressed people so far. The whole day we were waved too and welcomed by young men on motorbikes wearing bright silk shirts, each one a different colour. We left the family laden with Lemang, a sweet rice in a bamboo tube, beef sauce to go with it and a box of cakes.
The cycling down to Melaka from Georgetown was flat, hot, busy and largely dull unless you happen to be a palm oil anorak. The highlights are the towns. Taiping was a pleasant place to stop, it claims 31 Malaysian ‘firsts’ including the first museum, the first railway line and the first municipal garden built on the sight of an old tin mine, the latter surprisingly impressive.  We stopped in Klang for the night, a great little town 30 odd kms from Kuala Lumpar.  A visit to the port informed us that in 3 days a ferry could take us to TG Balai near Medan on Sumatra so we decided to wait and visit by train the Capital.

KL as the locals call it has possibly the world’s finest train station built, if I remember correctly by the British architect Hubbock around 1910. It was however hard to take a decent photograph as the station was hemmed in on all sides by 4 lane flyovers and canalised, uncrossable rivers. On our return after a hard days touristing we had the place in sight but found it almost impossible to reach by foot. Some scate-boardy street-punk types were shinning across a water channel on a pipe-line in order to get there. Anja didn’t fancy this so we spent another 45 minutes dodging fast moving traffic and exploring dark corners under bridges before we managed to arrive. There are some interesting buildings in KL but getting to them was usually a similar, sweaty experience to the above, even though they are really not very far apart. The place reminded me of some American cities which seem to have been designed without humans in mind.
Back at the port, excited about Sumatra, I was informed that we could not go to TG Balai as we did not have passports from any of the countries listed in felt-tip pen on a grubby piece of paper stuck to the wall. Having been assured, all be it from the car park attendant, that all types of westerners took this boat, I was miffed. There was a boat leaving for Dumai, further south, tomorrow if we would care to wait another day. Our first reaction was to do this but in discussion it seemed our hearts were no longer in the Sumatra trip. Patrick and Sara, our new Swiss cycling pals we met in Georgetown, assured us Lake Toba was wonderful, but a French couple we met briefly in Laos said they didn’t enjoy the cycling and advised us to get a boat to Java. I think my problem was that from Dumai we would be heading north again and this is not direction Sydney. We cycled south to Malacca. 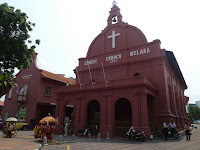 Around 11.30 one morning on a busy highway, steaming along in the other direction, were Dave and Nancy, Australian Americans doing pretty much our trip in reverse. They had already cycled 82 kms that day compared to our 12.(We do like to have a second breakfast shortly before lunch and this slows us down a bit)! These were interesting folks we would have liked to cycle with if we could have kept up. A shame they were going the other way. We have just received an email from some friends of theirs in Singapore who have offered to meet us at the border and lead us back to their house. We have eagerly accepted, not least because I have, for some unquantifiable reason, been a little afraid of Singapore. Now I am looking forward to it.
Malacca is magic. We are staying in a beautiful old room in Chinatown, the old Colonial Quarter. There are 16th Century Chinese temples next to Dutch and English style churches in old streets that remind me of Lisbon. It seems every other “sehenswurdigkeit” (a German word we should adopt so I will start the trend) was built by the Portuguese, improved by the Dutch and then, if not raised to the foundations, was used as a gunpowder store by the British. They say around 1500 one could see up to 2000 ships moored in the natural harbour. Apart from the model at the maritime museum, the only vessel we saw was an amphibious open air tourist bus type contraption that tried to mow us down on the one-way system. Boats are obviously exempt from normal traffic rules. Life has never been better but I do feel I missed the chance for a great eulogy; “Here lies the (flattened) remains of T.H Franklin. He rode over-land to Malacca where he was run over by a boat!”
Posted by BikeBlogger at 06:12

I can't believe your still going, I'm so jealous. I just competed in the Tour de Timor (6 day MTB race stage race) and it reminded me a bit of cycle touring and how I miss it.