There are four ways into Singapore from Malaysia, Two roads and two ferries. We were on the west coast so the nearest bridge seemed the obvious option but we were informed that this new motorway bridge was not open to cycles. The next nearest was the causeway crossing from Jolong Badur to Singapore. This is apparently incredibly busy and the roads are unpleasant all the way. We had been invited to visit Ken and Elaine some friends of Dave and Nancy the cyclists we had met near Penang. Ken and Elaine lived in the Joo Chat area on the East side of the city which could be reached by coastal cycle-path from Chandi, the ferry port serving out two other options which were boats from the other side of the peninsular. This sounded more like us though it would take us an extra day to ride round.
After more palm trees but little traffic we arrived in Dusai where we treated ourselves to a 24 hour package holiday in a slightly dated holiday resort on the beach with a swimming pool and all. We got a special rate (it was very cheap) as we were adventurous cyclists and all and joined the other 6 guests in this 120 room, 5 floor, manicured hotel. Next day we ambled down to SG Ringit. 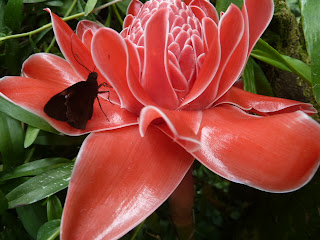 The “bum boat” to Singapore left when a few more passengers turned up, it is supposed to leave when there are 12 but there were only 4 of us and the bikes went on and off easily with the bags still on. All was quiet on the other side and we were alone going through security and immigration. No problem apart from my knife which was seen on the X-ray machine. It is illegal to carry a “weapon” in Singapore and apparently a breach of etiquette not to declare one if you have one.  So eventually there were 4 policemen and 1 policewoman and I in the little customs back room having a serious chat about the situation.  The knife was photographed and forms were filled out in different colours and superiors were disturbed from important lunches by hasty and whispered telephone calls. Was I worried?... Not at all, the problem Sima and the boys were trying to solve was how I could retain the knife without running a risk of being found with it by some other police down the road and getting into trouble. As we left England some surly and rude officers confiscated my little pocketknife and told me to bugger off if I didn’t want any trouble, here were 5 polite officers taking an hour of their time to find a way that I could keep a sheath knife. And they did.
I was expecting not to like Singapore, thinking it was all city and silly rules and regulations but these police and the shaded 25km cycle-path which led us into town through a park on the coast had me enthusing about its virtues. Ken and Elaine lived in an apartment building surrounding a leafy garden and a couple of swimming pools. We ate home-cooked food with good company and Ken, a keen cyclist took us on a two-wheeled tour of the city, seeing all the sights from cycle-paths. When you know your way around, Singapore is a great city on a bicycle. The architecture is impressive, new and old and yes, the place is clean and it seems a lot of the draconian rules have been relaxed; it is possible to jay-walk without being strung up by the toes.
What we found strange was the high number of westerners here, notably young women with toddlers and young men with mobile phones.  The old harbour district has been converted into a pleasant if sterile bar and restaurant zone where it seemed antipodeans were on one side of the river swilling 4x, chewing steaks and watching wide-screen ausie-rules while on the other, in front of the rugby, eating fish and chips and downing pints of Guinness were, well, you know who. The place smelt like London.
Indonesian visas were no problem, in fact, really fast and efficient. Ken rode with us to the ferry port where we caught the boat to the nearby Indonesian island of Batam where a ship apparently would take us to Jakarta.
Thanks Elaine and Ken. It was a pleasure meeting you both, seeing the sights of Singapore and recharging our batteries before braving Jakartan traffic.