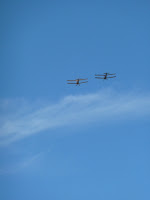 South Island, New Paradise
It can happen in any season and in almost any place but in this case it was late summer/early autumn in and around the lakeside town Wanaka, New Zealand. It lasted for the long weekend of Easter and was something one might experience, with luck, a half-dozen times between cradle and grave. What made it happen was, I suppose, a particular juxtaposition of weather fronts, of high pressure zones, of inversion layers in flat valley floors, of deciduous trees no longer having need of chlorophyll and of particular mineral suspensions in water reflecting well the colour blue. We all knew, all of us who were there, that we were the chosen few, the lucky ones. A few amongst us tried through habit to photograph it but soon put away our cameras, we knew before hand they were not up to the task. This was not something that could be captured in bits or bytes and reconstituted for later viewing.
Strangers passing on the riverside path smiled at each other in unspoken acknowledgement. 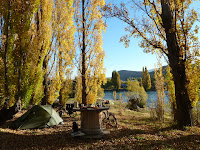 We were somehow bound together in an unexpected brotherhood. Mountain-bikers waved to fishermen whose focus had wandered from trout. Teenage boys made room for middle-aged women on rough hewn benches and sat together in comfortable silence. Occasionally a drone could be heard approaching, a sound familiar to us from the childhoods our fathers, and all eyes would turn to the skies as an arrow of Sopwiths or Spitfires would chew their way across the patches of azure blue that spanned the gaps between the flittering gold of the poplars. It just happened there was an air-show in town.
I am fumbling to describe the perfect day. There were three of them and then they were gone. There was no disappointment when they were over as we knew it couldn’t last. We knew not even what had changed, nothing discernable, no singular factor had significantly altered but the ultimate combination must have slipped ever so slightly out of alignment. 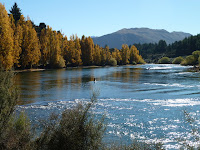 Perhaps a slight breeze now ruffled the waters surface where the reflections, through polarization were clearer than the mountains themselves, perhaps the chemical balance in the leaves of beeches and willows had transformed or a few too many leaves had fallen but we woke up on the fourth day to earthly beauty, the hand of heaven had lifted, hopefully to descend upon some other community in Argentina, England or Nepal. 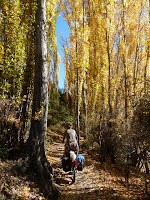